WSO2 Summit Seville: Everything that happened

Last March 7, the city of Seville hosted for the first time a WSO2 Summit under the slogan “The key to successful integration”.

The event brought together leading figures from the national and international integration scene, such as Paul Fremantle, CTO and co-founder of WSO2; Roland Major, systems architect for Transport for London; Pablo Fernández Montes, from the Applied Software Engineering group at the University of Seville; and many more.

The place chosen for the celebration was the emblematic Hotel Alfonso XIII, located next to the Reales Alcázares.

As expected, the event had a full crowd with more than 120 attendees, and as if this were not enough, we had the honour of being co-organizers!

For those who could not attend, in this post, we summarize everything that happened so you get a flavour for what you missed.

The summit brought together a multitude of CIOs, CTOs, CDOs and members of systems and integration teams, with many questions and an interest to learn new integration techniques and strategies.

In addition to these, also business and integration architects (national and international), interested in discovering best practices to challenge the integration of systems in their respective companies. 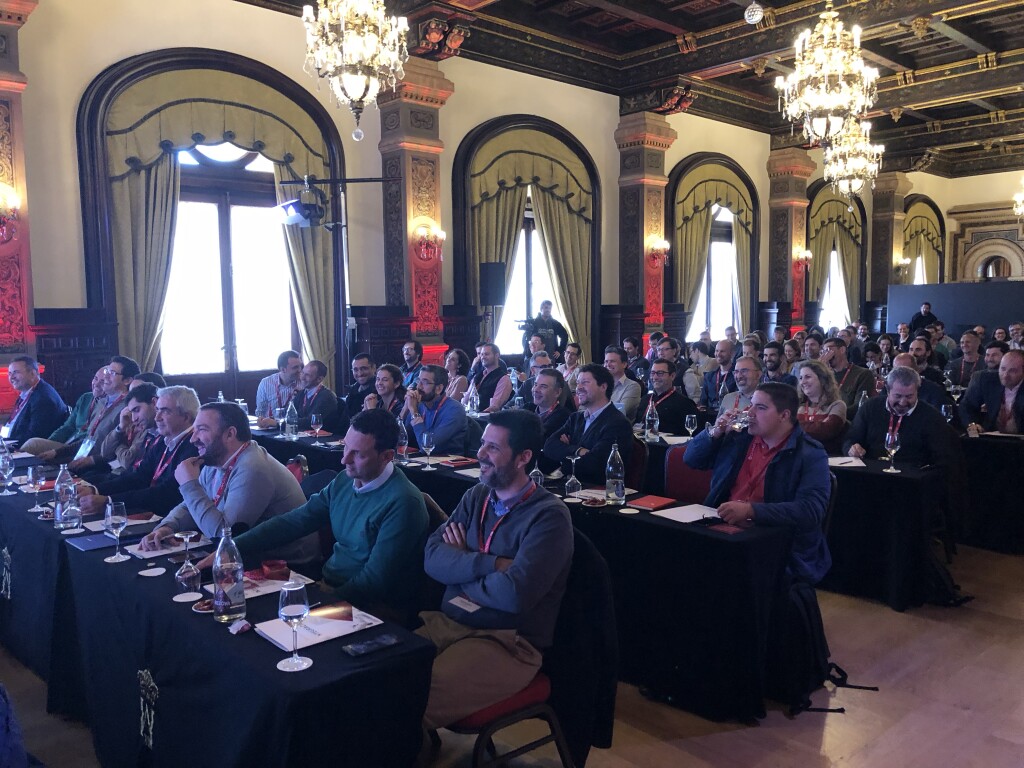 Microservices, interoperability and many other topics

As mentioned, the event was attended by many personalities from renowned companies in the sector, presenting talks, keynotes and very interesting success stories, which are summarised here:

With the presentation of Aleix, asking “How did we get here?”, we began the WSO2 Summit Sevilla event.

The CEO of LiquiD made us look back and remember the different revolutions caused by disruptive technological changes from the steam engine, electricity, through the birth of the Internet, to the current one, the data revolution. 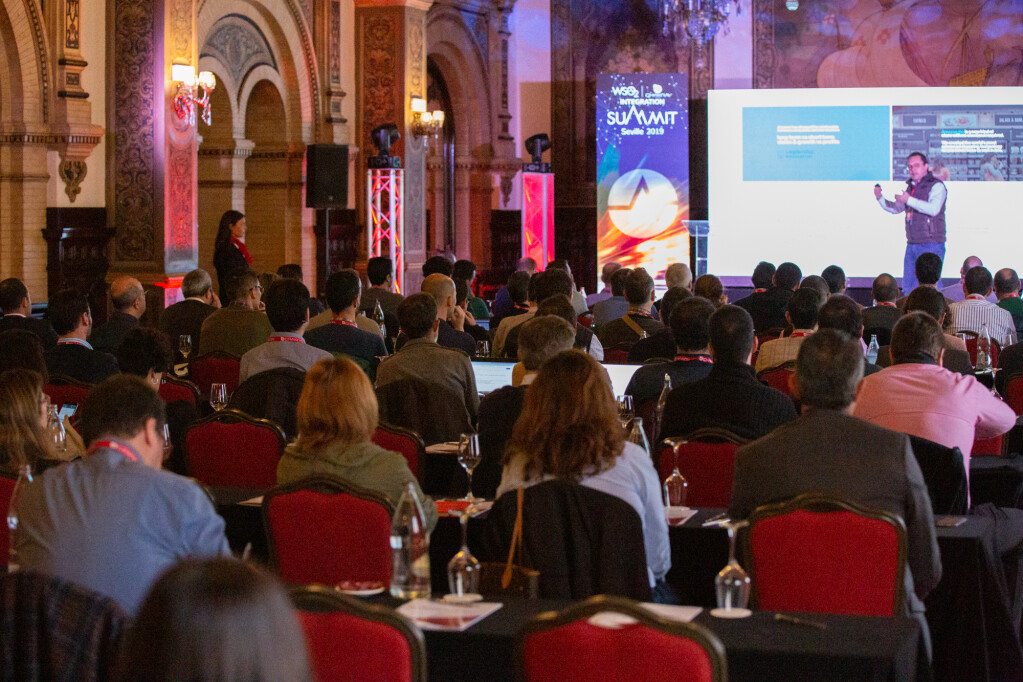 A key difference that Valls highlighted between the previous revolutions and the current one, is that historically it has been governments and industry that have led and promoted change, defining business models that make technology available to everyone. While today, thanks to smartphones, everyone has data and access to technology, now governments and companies are looking for business models to survive. So, perhaps we could say that data is the new oil?

Emilio in his presentation “Strategy of interoperability for environmental procedures in the Junta de Andalucía”, described the needs for the implementation of an interoperability office, and the benefits that were achieved with it.

-Interoperability: The key to ensure the success of your IoT infrastructure-

In addition, as a result of their experience, he advised attendees about the different points of view in which a project should be considered: organizational, semantic, syntactic and technical.

Ramírez concluded his lecture by explaining the basic characteristics that an interoperability office should have, among which stands out: having a solid and scalable architecture, and the definition of an action calendar.

Major, presented a didactic case study from his time at Transport for London. During his presentation he explained in detail the problems they were facing, the processes they went through, until finally being able to implement the integration solution of WSO2.

But that’s not all, Roland went a step further and in a schematic outline perfectly summarized how the components of WSO2 were located in the integral architecture, its relationship and operation. 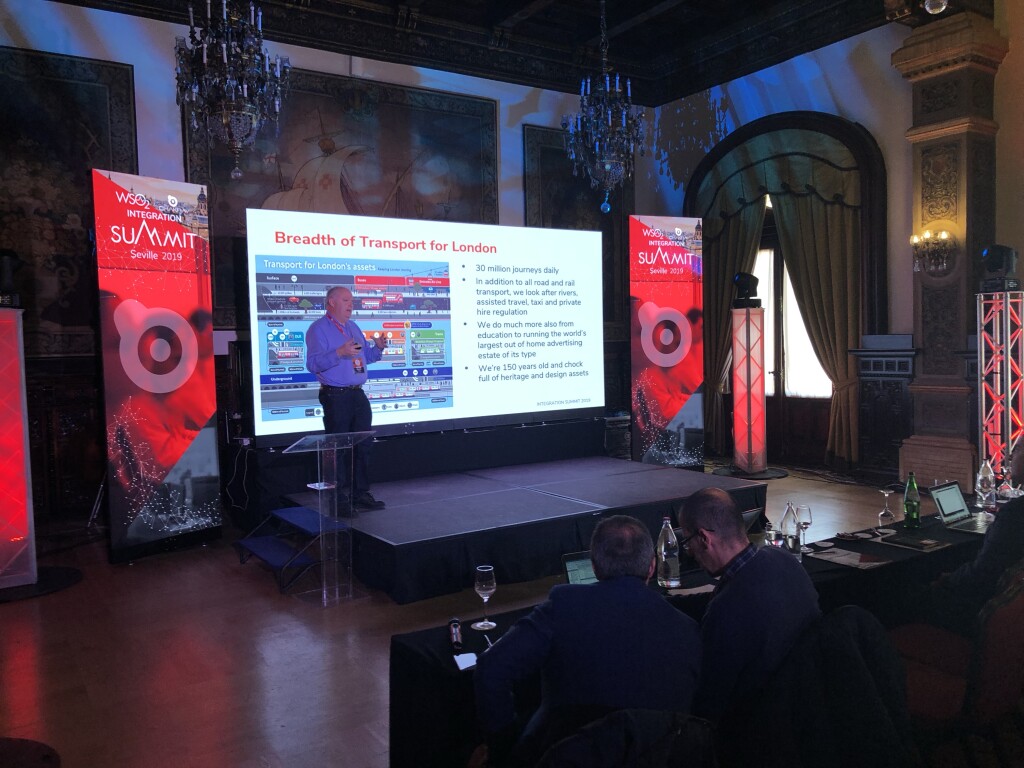 The fourth presentation of the “API first” conference was given by Paul Fremantle.

It summarized the history and market presence of WSO2, which has recently been named by Forrester Research Inc. as the only fully open code solution in the report “The Forrester Wave ™: API Management Solutions, Q4 2018”. 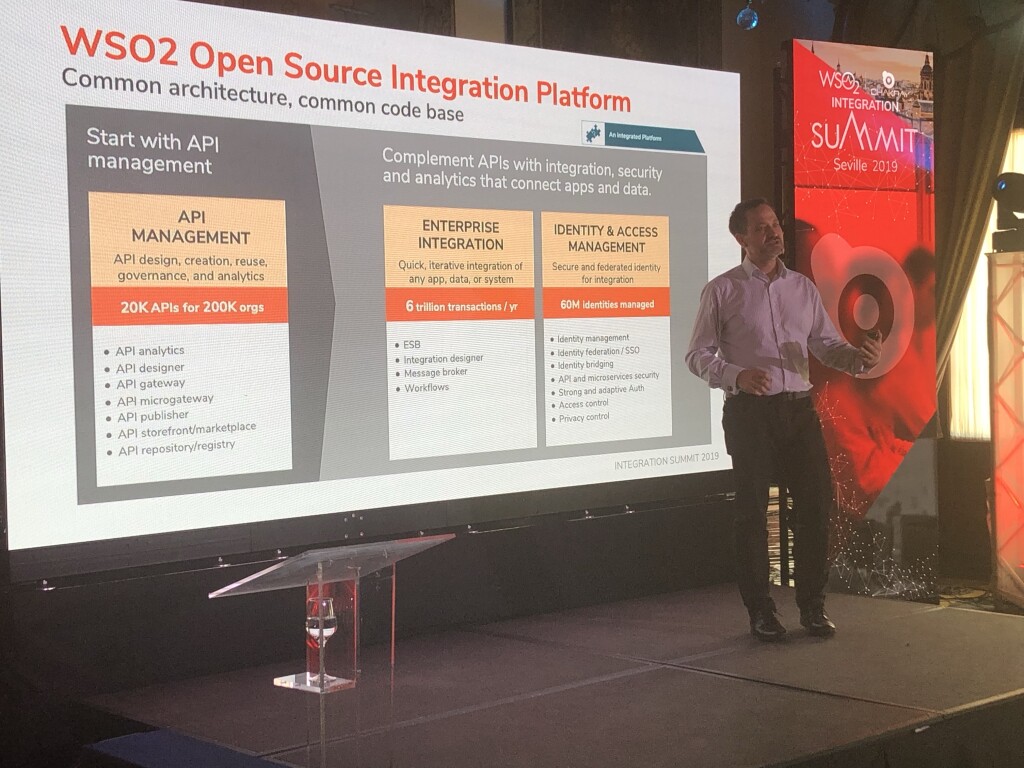 The main topics he covered during his conference were:

-API Management: the best ally to accelerate your digital business-

Pablo presented the research carried out by the University of Seville on the Open API “Promotion of an interoperable API ecosystem”.

During his presentation, Fernandez presented the evolution of the initiative carried out, from the Swagger specification, and explained the new version of it and the projects of the organization for the future. 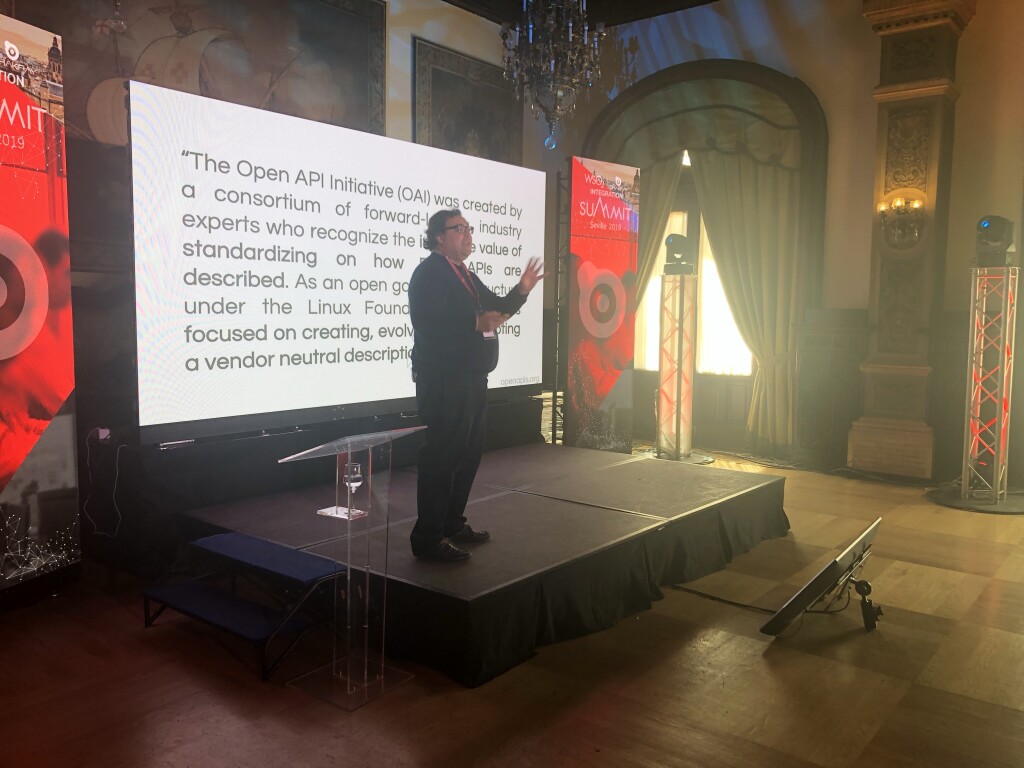 Pablo Fernández Montes (University of Seville) presenting in the summit

WSO2 Summit Sevilla was ended with a talk by Stefano Negri, focused on “API & Microservices” and “API Security”. 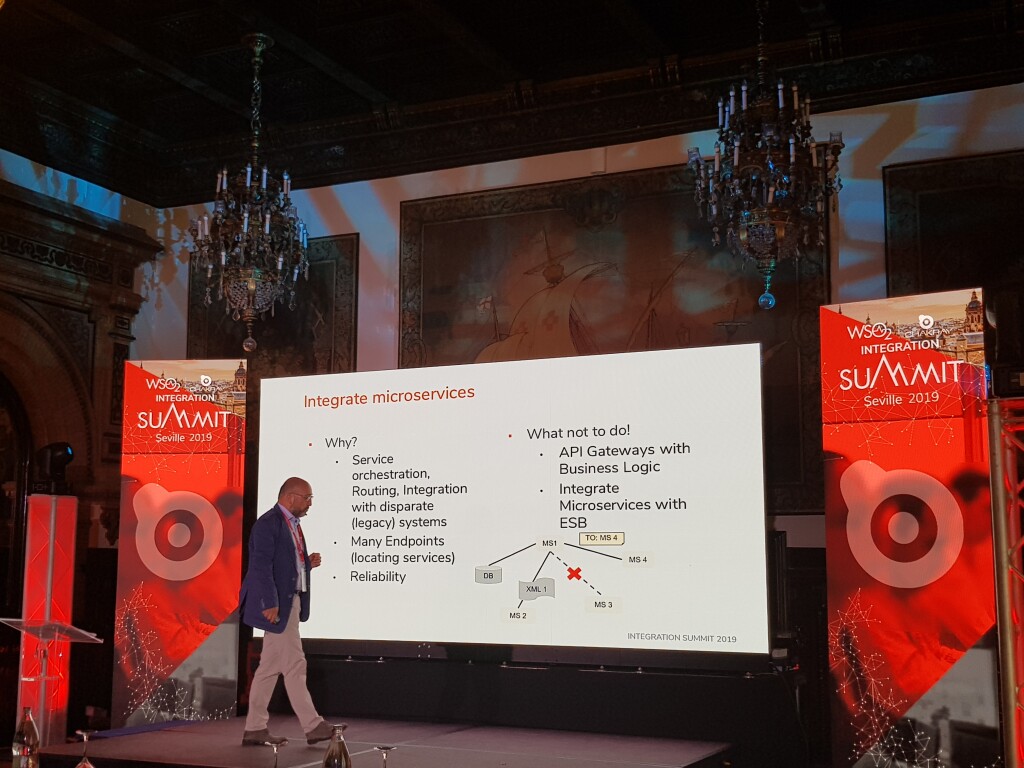 Stefano explained how the different key components of WSO2 (APIM, ESB, MB ..), are integrated perfectly and how they work together.

Regarding “API Security”, Negri explained the importance of that point, as well as highlighting that OAuth was the first tool to protect APIs.

Why should not you miss these Summits?

Attending these events is the best opportunity to discover new techniques, innovations and the latest IT trends.

In addition to learning from the advice and experiences of major industry leaders, not only during their conferences but also during networking and breaks.

After discovering the speakers and all the topics discussed, we are sure that the next WSO2 Summit will be even more popular. However, if you want to receive the videos with the conferences of this event, you just have to fill out this form. 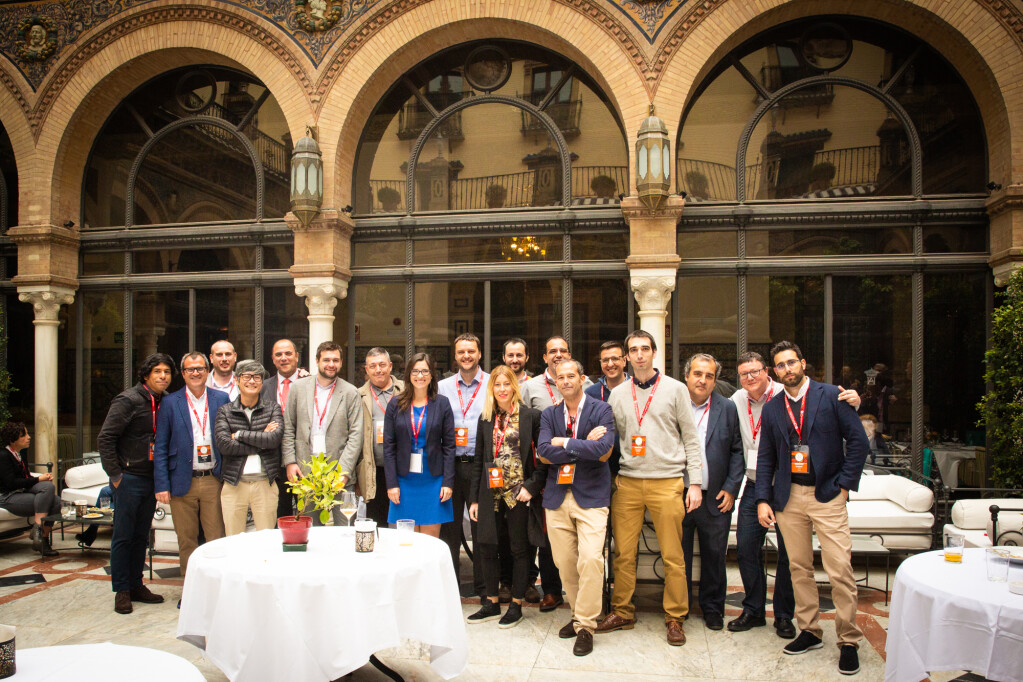 Until the next summit!

Cucumber Testing: How to Ensure Reliability in Developments