What is Ballerina? The new programming language for integrations

Like all developments of WSO2 Ballerina, which was introduced by the company’s CEO and Chief Architect, Sanjiva Weerawarana, develops open source applications designed to enable people and organizations of all types to use it and improve it.

–4 things you should know about Ballerina–

Achieving perfect integration has long been one of the biggest headaches between programmers and those responsible for product architecture. The differences that sometimes occur lead to significant losses of effort and economic resources. In the dilemma between those who prefer to use diagrams and those who opt for the code, Ballerina is called to be an extraordinary bridge with infinite possibilities.

The flexibility of Ballerina, determinant

Ballerina is able to generate integrations starting from sequence diagrams. It also allows you to write code in Ballerina itself or in Swagger. It has ready to use plugins for IntelliJ IDEA, Vim, Atom, Sublime and others”. Therefore, if something characterises this language its flexibility. In fact, the community of users who contribute to its base code grows every day. Its API also allows you to take advantage of the functionality of other programs.

From zero to hero

Unlike other programming languages, Ballerina has always been specifically designed to enhance integration, which means that it is capable of handling from the simplest to the most complex programs, such as complex service chains and routing scenarios In content. The WSO2 product already comes as standard with native support for REST, Swagger, JSON and XML. It also has connectors for social networking services such as Facebook or Twitter. On the other hand, the execution time required is very short because it works at high speed.

–Why should you start using Ballerina?-

Visual, intuitive and drag and drop

Ballerina is, above all, a graphic language, understandable and attractive. Also, very intuitive. It allows, in fact, to draw both the particular integration scenario and the components that need to be interacted. It is as simple as dragging and dropping the elements in a single image. The diagram that is being generated is at the same time the integration code that is being created. To recover the original view simply change to the same source view. Explaining a process to another person is much simpler if you have a sequence diagram. Describing in them what is needed and then translating it into code allows not only to explain the situation but also, and equally important, to easily create an integration logic. 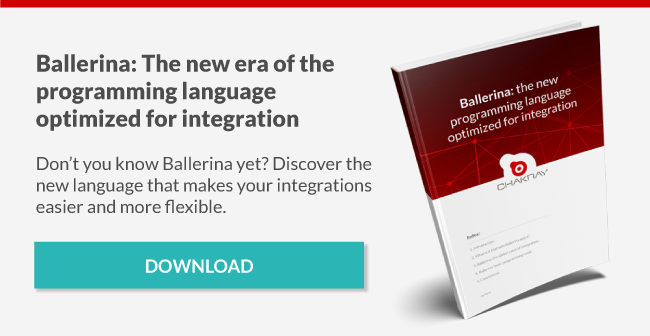